Alex is a personal client of mine who plays hockey in the WHL currently and is kicking all kinds of ass.

He’s super ambitious, is excited to learn the why behind hockey training and nutrition and not just the how, and also keeps in close contact with me throughout the entire year so that he is always maximizing his progress.

You can probably relate to Alex’s goals: he wants to live life on his terms and make the NHL one day.

If you did relate to Alex, you may also carry one of his flaws, and that’s the character trait of being super Type-A.

He wants to say “yes” to absolutely anything and everything thrown his way that could possibly make him a better hockey player—he’s worried that if he doesn’t do absolutely every strategy possible to optimize his life that he will be decreasing his chances of getting into the NHL.

I found all this out one day when we were on the phone and he was telling me about the chaos of his morning routine.

He’s Type-A, so naturally he takes my advice but also reads the advice of every other trainer on planet earth to try and devise some sort of super plan.

Because of this approach, he read that he needs to be meditating, journaling, exercising, doing yoga, repeating affirmations, and watching motivational videos first thing in the morning every morning.

As you can see, this is one hell of a morning routine.

Frustrated with how much time this took him, he mentioned on the phone that he was getting up around 6 AM and was still running behind by 8 AM, then by the time he has breakfast it was already getting close to 9 AM; and by the time he actually got to his actual hockey training I prescribed for him it was almost 10:30 AM with the drive + warm up.

By 10:30 AM, you can imagine he’s pretty flustered with everything he has already done and doesn’t really have much to show for it.

Here, a trainer might want to add some caffeine to “keep him going”—or add yet another strategy to try and “balance his energy”…

Yeah, we’re not doing that.

While I had him on the phone I said point blank:

“Alex, we are cutting the unessential in your morning routine. This is absolutely not necessary for you to succeed in your hockey goals”

Pretty shocked at my answer, he didn’t say much. So I carried on:

“Being great doesn’t mean doing everything, it means doing fewer things. You have to stop trying to do so much first thing in the morning because all of these other gurus told you to. Cut your activities down and focus on what matters. This will save you time, save you stress, and make you a better hockey player”

People think focus is about saying yes to everything that feeds your goals, but it’s not, being focused is about learning how to say no so that you can say yes to only the most important things.

In this case, I want him to go a mile deep in hockey performance. Forget the other crap.

Your morning routine should reflect your both your day and your long-term goals.

In the case of hockey players, almost all of them have no problem getting to the gym and training hard, but, the overwhelming majority of this crowd is terrible for meal preparation.

And let me tell you something, your nutrition is just as important as your training, so placing more emphasis on one and not the other is shooting yourself in the foot.

You absolutely will not become the best hockey player you can possibly be if you take a slack-job to your nutrition.

You need to have a plan.

You need to prepare in advance.

You should have meals ready.

You should grocery shop before you run out of food.

Everything should be ready to rock, always.

In Alex’s case, it wasn’t. He was doing all of these other bonus-rituals that are by no means bad, but fall short in importance compared to nutritional preparation.

So, I completely slashed his morning routine down and included some meal prep time. This saved him time because he didn’t have to get up as early—and it saved him stress because he had fewer things on his to-do list while simultaneously found himself not having to run around to try and find healthy options.

They were already there right in front of his face due to his morning routine and due to doing less.

My Example Morning Routine For Success

Or, take me for example. I wake up, go to the bathroom, splash water on my face, perform deep breathing exercises for 5-10 minutes, and then tackle my to-do list I made the night before.

Which brings me to one of my biggest points: do not make a to-do list in the morning, always make your to-do list the night before so you can hit the ground running first thing in the morning.

Additionally, the most important part of my to-do list is what I call my “Targets”.

The targets on my to-do list are the most important tasks I have that day, and I start them immediately.

If you are struggling with motivation and are finding yourself procrastinating on some big projects/tasks that would move your life forward and move your closer to your hockey goals, you need to wake up and do them as soon as possible.

As the head coach here at Hockey Training, my day can blow up pretty fast with e-mails and phone calls by 10 am and that’s why I must crush whatever needs to get crushed first thing in the morning.

It also becomes very empowering, if you tackle your target first thing upon waking it gives you a pride and momentum that you carry with you throughout the entire day and adds energy to all the other tasks that you need to accomplish in order to dominate the day.

This can be tough sometimes though because the targets are generally the big things that we avoid.

But, you know your weaknesses, and you need to crush your day. When you kill your target upon waking, this creates a huge leap towards you becoming a better hockey player and allows you to build momentum.

And when we build momentum we build confidence.

And when we have confidence, we take that out there on the ice with us.

But if we clutter our day/morning with unessential stuff like social media, sleeping in, hitting the snooze button, and rushing to work so we “didn’t have time for breakfast”, you will find frustration and stagnation.

That brings us full circle all the way back to Alex.

He was doing way too much, and I had him cut down on his self-help rituals instead of adding more. I just imagined what he could do if he put all that energy into less, not more.

So, what should you do?

It depends on your goals, your readiness, your willingness, and your ability. But, I’d start here:

#1 – Don’t do stuff that doesn’t come naturally to you, even if it sounds good.

For example, remember when I said that I do deep breathing for 5-10 minutes?

Yeah, that’s because I can’t stand meditation. It doesn’t come naturally to me and makes me feel like I’m wasting my time more than anything else, so I found a different avenue in order to allow for many of the same benefits but done through a method that energized me and came naturally to me.

Put simply, if it frustrates you then why are you doing it?

#2 – Cut back on your morning exercise.

Some people think it’s necessary to start the day with an hour of yoga. If that works for you and you love it, great! No problem.

But, if it clutters your morning and you hate it, don’t do it!

Yoga is not a mandatory element for maximal hockey performance. Forget this stuff and do some of the mobility routines I have done videos and blogs on a few times a week and you’ll be good to go.

#3 – Tackle your target first, no matter how much you don’t want to.

For Alex, this meant getting his meal prep in.

After taking my advice, the kid has gained 8lbs of quality mass in 2-months.

This wasn’t anything magical I did, I just showed him what his real target was and also showed him the power of NO, and the weakness of saying YES to everything.

To end this off, my challenge for you is this.

What one activity could you cut from your day that is clearly an anchor bringing you down?

Bring that over to the guillotine, and drop the blade.

If you’re ready to get started taking your hockey game to the next level check out the hockey training programs we offer here at HockeyTraining.com and let’s get you started!

What To Drink During Your Hockey Game 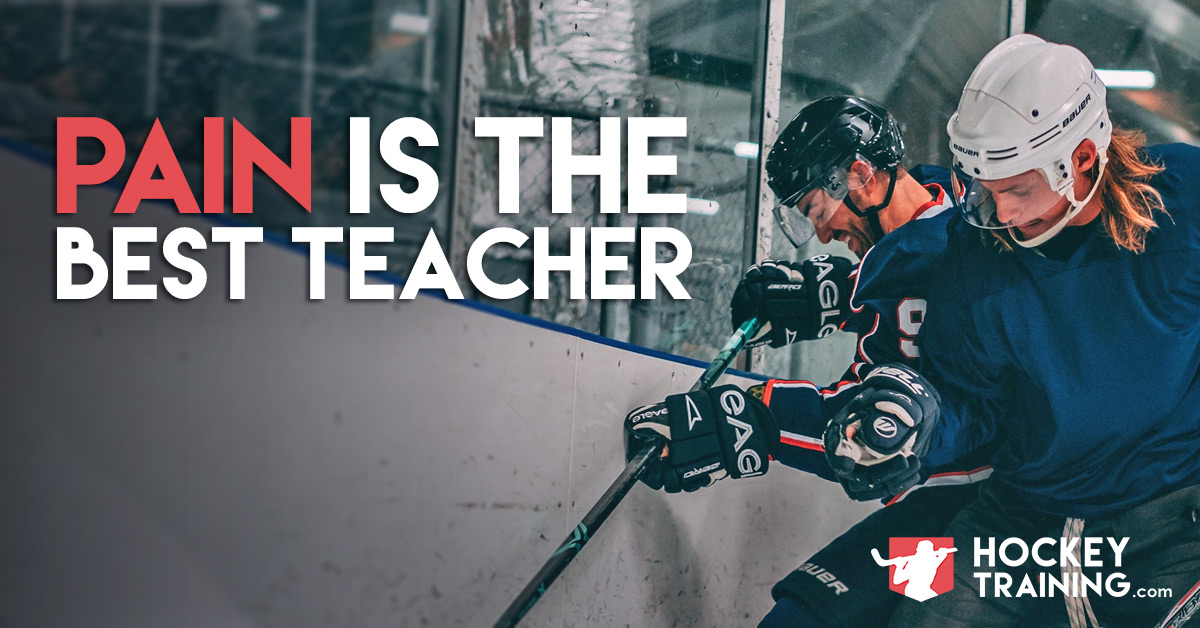 Pain Is The Best Teacher

Think about some of your most memorable lessons in life right now. Whether in the gym, on the… 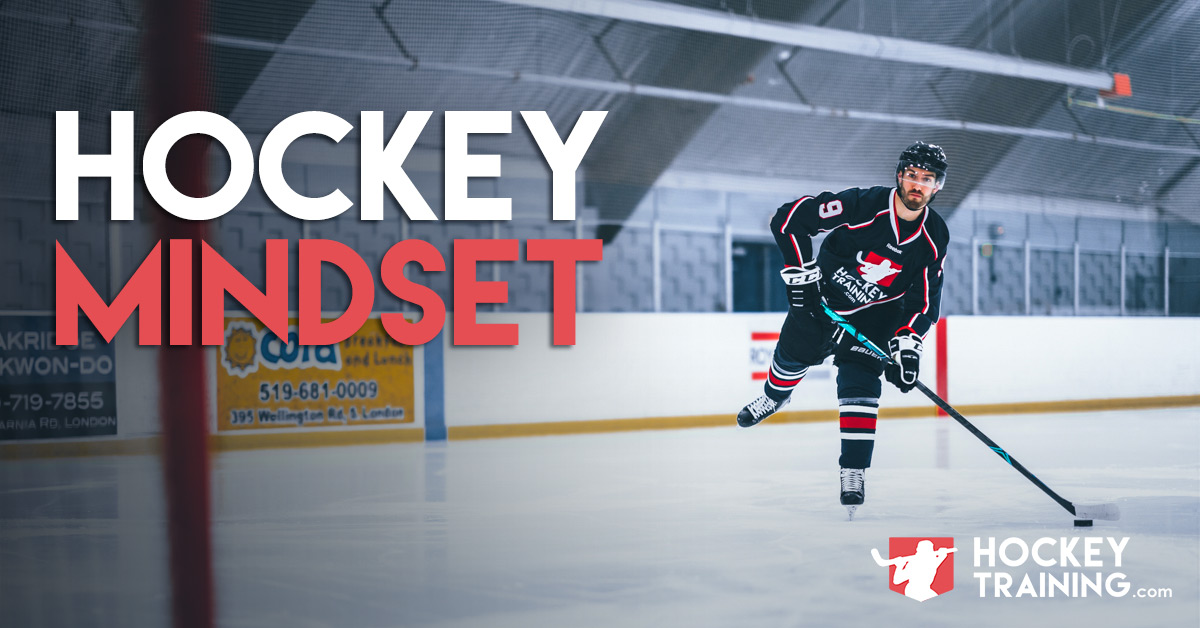 Hockey Mindset Tips To Perform At Your Best

Today’s article is more or less a “release” of thoughts, experience, and emotion connected to the game of…

How to Develop a Champion’s Mindset

In preparation for high-pressure situations such as tryouts, camps, or significant games, it is important to be as…